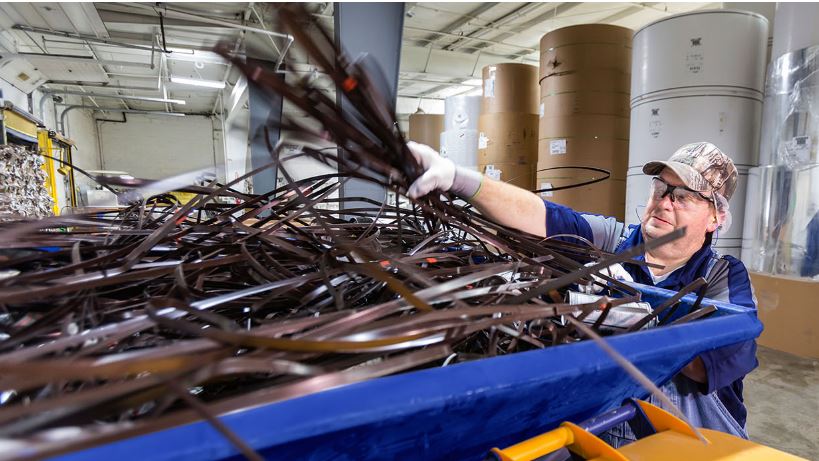 RockTenn, based in Norcross, Georgia, one of North America’s leading manufacturers of corrugated and consumer packaging, has been focused on reducing the amount of solid waste it sends to landfills. By engaging employees from every department, such as finishing inspector Byron Manning, at one of the company’s packaging factories, RockTenn recycles much of its process waste. (Photo courtesy RockTenn)

“Investors want to be sure that a company’s sustainability efforts are focused on the material issues that affect its ability to thrive and survive,” advises Boston Consulting Group’s latest sustainability report , authored in collaboration with MIT Sloan Management Review and published earlier this month.

These investors want to know “the business specifics of how sustainability is creating value for the companies they invest in. A host of factors drives that value, ranging from reduced costs of capital to greater innovation.

Based on a survey of more than 3,000 executives and managers from more than 100 countries, the report is titled, “Investing for a Sustainable Future: Investors Care More About Sustainability Than Many Executives Believe.”

Today’s investors have access to richer data and more sophisticated analytics than the investors of the past and their opinions are better grounded in accurate information. As a result, 75 percent of investors now think that increased operational efficiency often accompanies sustainability progress.

The report advises, “Executives who want investor support need to develop and tell their sustainability value-creation story. That value, according to our survey, stems from three interrelated components: a sustainability strategy, a clear business case, and business model changes that realize the benefits.”

The report uses General Electric as an example. In 2004, the company embraced sustainability as a growth driver by establishing Ecomagination brands, focused on environmental safety.

During the recent global economic crisis, these brands were GE’s only source of growth. They grew by 12 percent while other revenues shrank by 2 percent. In 2010, Ecomagination products drove $85 billion in revenue. By 2014, the number had jumped to $200 billion.

In 2015, Mitsubishi announced that it was making a $1.1 billion investment in Olam International, an agricultural trading company based in Singapore.

Many believed that the purchase was driven by Mitsubishi’s desire to capitalize on growing incomes and consumption in emerging markets. But Mitsubishi was  drawn to the company’s sustainability footprint and its expertise in working with small farmers and producers in remote areas of Asia and Africa.

And on the bottom line – a profit. Olam’s sustainability footprint drove a 29 percent premium over the company’s 2014 average share price.

Earning a reputation as a sustainable business isn’t enough any more either – the reputation doesn’t seem to be as important to investors as how a company uses sustainable practices to create value.

Dow Jones has offered a sustainability index since 1999, and the “Financial Times” has produced its FTSE4 Good Index since 2001, but these mainstay indices appear to be losing their luster for investors; corporate executives seem to care more about these lists than investors do.

Look at the responses from managers in publicly traded companies – 32 percent say their company is listed on a sustainability index, but 36 percent didn’t know if their company was listed or not.

Investors care even less. Only 36 percent of investor respondents said that a company’s inclusion in a major index is an important factor in investment decisions.

“One reason is that data in many sustainability indices is self-reported and usually vetted for completeness, not accuracy,” the report states.

Corporate leaders may believe their place on these lists or indices has brand reputation value that attracts consumers even if potential investors don’t care about them.

But they may begrudge the corporate time and resources spent filling out sustainability questionnaires, especially if they don’t believe investors impute value to these rankings.

The diversity of organizations and systems, ratings, and metrics has led many corporate sustainability managers to the verge of “survey fatigue.”

Yet sustainability is increasingly important for investors, as evidence mounts that a company’s ESG performance has an impact on long-term financial success.

Nearly half would not invest in a company with a poor sustainability track record, yet, only 60 percent of managers in publicly traded companies believe that good sustainability practices influence investment decisions.

Inspector John Nicholson with the Nuclear Regulatory Commission and Robert Clark, a radiation control physicist with the Connecticut Dept. of Environmental Protection, at a remediated brook on the ABB, Inc. property in Windsor, Connecticut, take measurements and collect soil samples to verify that the site is clear of radioactive contamination, Sept. 12, 2011 (Photo by Nuclear Regulatory Commission) Public domain

Maximpact Ecosystems is the world’s first comprehensive full service impact and sustainability community, offering full end-to-end support for communities, social entrepreneurs & corporates, non profits, intermediaries & funders, governments bodies and multilateral institutions wishing to change our planet to be a better, holistic, sustainable entity benefitting many at once, yet helping one at a time.
Learn more about MaxImpact and their articles.