The first immersion of the 2018 BALLE Local Economy Fellows took place April 22-26 at Evan’s Mill, a nature-and-retreat center in Smithville, Tennessee, a small town that is about an hour east of Nashville.  For BALLE, this marks its fifth class of Fellows, meaning that a sizeable Fellowship “alumni” network now exists. It also means that the collective we—that is, both the organization and the network—have matured. Neither the organization nor the network has it all figured out, by any means, but gradually we are moving toward what sometimes gets called in foundation circles a “theory of change.”

The BALLE fellowship idea is that developing strong networks among similarly motivated individuals breaks down isolation, fosters peer-to-peer learning, and builds a common base of knowledge and skills. The idea is not that the BALLE organization or network alone will lead to the change we seek. But the network BALLE builds helps create a common culture, rooted in eight core principles—act local first, prioritize equity, regenerate soil and nature, accelerate collaboration, share ownership, shift capital, co-create policy and cultivate connection—that make it a lighter lift for both the Fellows themselves and others to build community, dismantle systems of oppression, and generate a more equitable distribution of capital, wealth and income.

Each group of Fellows builds on the achievements of the previous groups. The 2018 class is weighted heavily toward rural and food systems work—this was done with a view of expanding the network to better cover these fields. And care was taken to ensure that in building this rural BALLE table that a diversity of voices be present in as many senses of the word as possible, including age, race, and geography. A majority of the Fellows are people of color and work in communities of color, including folks who work in the Black Belt, in Latinx and Asian immigrant communities, and in First Nations/American Indian communities. The current group of 25 fellows comes from 25 different places, 22 are based in United States and three are from Canada.

The first gathering necessarily focused on building relationships. A core part of this was having each Fellow—and also each member of the BALLE staff, facilitation and weaver team—spend six minutes telling their personal stories, followed by three minutes or so of reflections, that could be structured in different ways, according to what the Fellow preferred. Fellows had the freedom to tell their stories as they wished, but, in their presentations, Fellows were give as prompts the idea an outline that advised highlighting three key aspects of their work, two personal or professional highs, one personal or professional low, and a dream for the future.

Fellows were also asked to have a creative segment to the presentation—some shared poems, some shared songs, some told stories, some drew drawings. The sharing required each participant to be vulnerable as well as celebrate accomplishments and achievements. The deep sharing of information helps both individually—giving each person the chance to tell their stories in a safe space—and also helps Fellows find points in common that might not be obvious at first glance.

Some—but certainly not all—of the other highlights of the week included the following:

• Time Capsule and the Making of Meaning: Fellows set goals for the two-year fellowship at the outset.  We also discussed how meaning is created from the fellowship experience. Fellows also shared ways they made meaning of collective experiences. One noted that teaching others was a good way to educate the teacher as well as the students. Another Fellow said that the lesson that were most valuable involved sharing about failures and challenges, when it wasn’t about sunshine or flowers. I try to remove the fear of failure from my team. Failure brings faster growth.” Fellows also discussed the need to avoid appropriating others’ stories. “We need to acknowledge that sharing stories is a power position, hopefully for the good. But you are naming something on behalf of others, so there is a risk of exploitation or extraction.”

• Operating in Complexity and the Need for a Paradigm Shift. Facilitator Gibran Rivera introduced the concept of VUCA: Volatility, Uncertainty, Complexity, and Ambiguity. Much as we might want volatility, uncertainty, complexity, and ambiguity to go away, they won’t. So, we must acknowledge the reality of complexity and even the chaotic in our social worlds. Gibran suggested that one way of acting in an environment of uncertainty is to try things out and iterate. Gibran called this the “Trojan mouse” approach. A bit smaller than the Trojan horse, the idea is to do two things at once—act within the existing system where you have to, while also building a new vision through multiple experiments that more closely adhere to your long-term vision.

• Community Build: Facilitators Gibran Rivera and Tuesday Ryan-Hart led a session where Fellows were, unbeknownst to them (at least initially) divided into different class segments, divided from each other by lines of masking tape on the ground. BALLE staff and weavers served as the police and the housing authority. Not surprisingly, the BALLE Fellows quickly self-organized and overthrew the evil BALLE staff and weaver overseers.

• Gatekeeper and Friend: Facilitator Isoke Femi led a discussion regarding how specific events in our childhood can often structure our experience of the present. The word “gatekeeper,” as it sounds, is a blocking voice—an inner voice, usually rooted in some past experience, that can block you from achieving your goals. A “friend,” by contrast, is a facilitation voice that helps you achieve your goals. But understanding both voices is important. There is something to be learned from both gatekeeper and friend voices. Fellows were encouraged to share their experiences in small groups.

• Guests: We had two invited guests who lived nearby. One was Nashville-based Emily Thaden, Director of National Policy and Sector Strategy at Grounded Solutions Network, the national community land trust organization. The other was Hal Bowling, a BALLE Fellow from the last cohort and Executive Director of Launch, a Chattanooga-based business incubator. Fellows engaged Emily and Hal in 90 minutes of conversation about how to use common ownership as a strategy for land management and how to build business incubators with an equity lens.

• Nature: While it rained much of the time, we were at a beautiful location. One afternoon, many of the Fellows hiked to a nearby waterfall.

• Planning for the Future: The last day, we asked Fellows to identify trainings that they were willing to offer to the group.  Then Fellows put dots near the top three choices. In case there was any doubt, the range of wisdom in the room was in full display.  At future gatherings, many of the sessions will be led by Fellows themselves, thus helping build the collective field of knowledge. Evaluation, fundraising and loan fund startups were among the most popular offerings.

Goodbye but Not Farewell: At BALLE, the Fellows work in circles a lot, in order to foster both connection with each other and support an equality of voice for everyone in the circle. The gathering opened with a circle. And it closed with a circle. And then everyone said their goodbyes. But not for long! The Fellows will reconvene soon in Santa Fe, New Mexico this July. 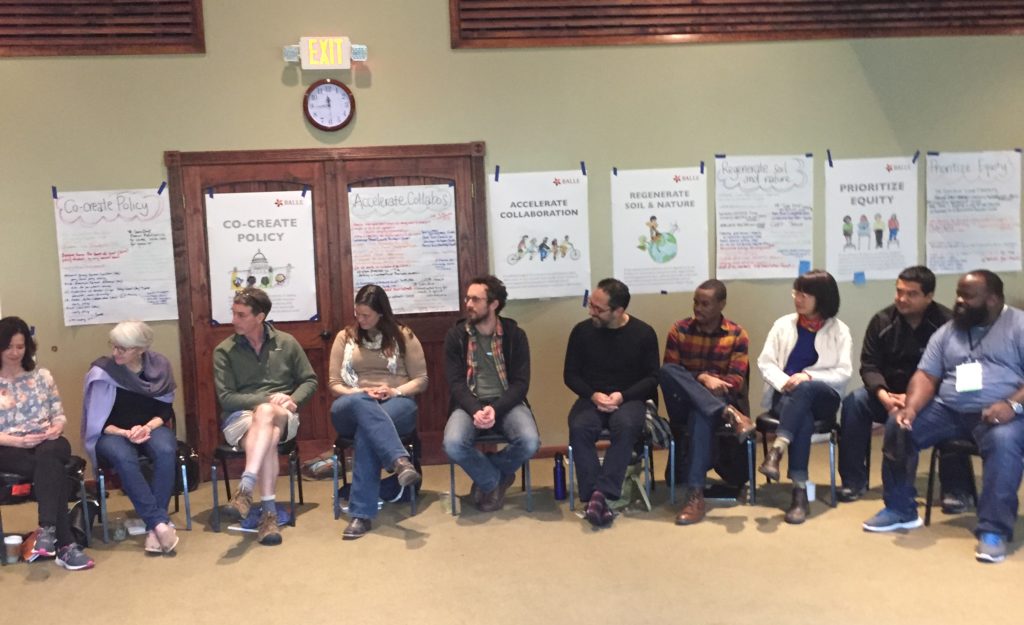 The post Building the Foundations of Economies That Work For All appeared first on BALLE | Business Alliance for Local Living Economies.